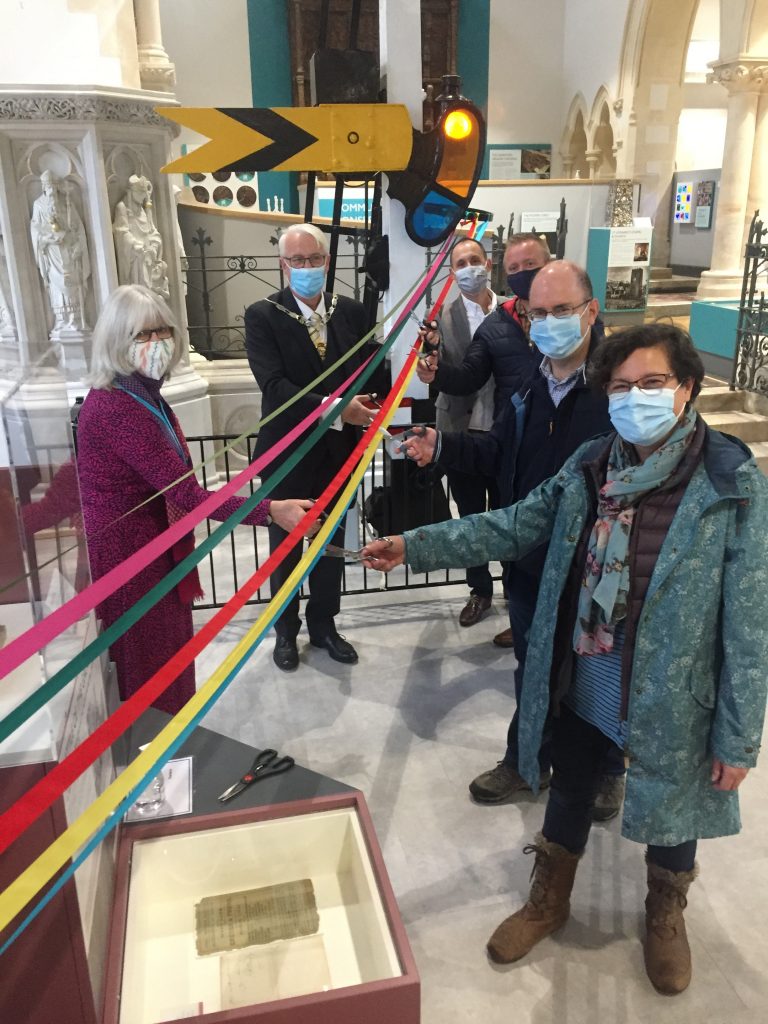 The doors were thrown open to the public at 10am on Saturday October 3, pandemic restrictions meaning however that only booked visits are possible for the time being.

The history hunters’ heaven is located within the £2.2 million Newton’s Place project which has been led by Newton Abbot Town Council and taken shape at the former St Leonard’s Church, Wolborough Street.

The reimagining from unloved and crumbling Victorian eyesore to 21st century community facility made a more than favourable impression on those lucky enough to be there for the opening.

‘It’s absolutely amazing, for me the biggest observation is I can’t believe the level of transformation,’ said resident Andy Waites who was one of those invited to cut the ribbon rainbow with Mayor Cllr Richard Jenks.

‘It’s quite spectacular and showing the history of Newton Abbot, its also really interactive and family-friendly.

‘And what with wi-fi and usb sockets in the community rooms upstairs which will all be for free to local groups when they open, it’s great for the town.’

Other first-day visitors were Ogwell residents Lindsay Cooper and her fiancé Darren Bevan who has volunteered at the museum since summer 2019.

‘It’s superb, excellent, so good for the town,’ said Lindsay who teaches at Newton Abbot College and is looking forward to the day when student trips can be arranged.

Darren added: ‘The old museum was basically two rooms in a house, a ten-minute walk away from the town centre where I don’t think many people knew about it.

All the visitors were impressed with the fact that despite a £2.2 million price tag, not one penny has been added to council tax bills.

Instead, the cost has been covered by a Heritage Lottery Fund grant of £950,000, donations from individuals and businesses, the sale of the old town hall and cash from house builders via the Community Infrastructure Levy.

It was a proud day for Cllr Mike Ryan, Chairman of the Newton’s Place Project Board.

‘It feels fantastic, it’s been a long time coming but they’ve made a fantastic job of it,’ he said.

‘Hopefully next year we can formally open the whole building which isn’t possible yet because of the Covid-19 situation.

‘I believe the big room can seat up to 200 people and it’s there to use free if you’re a charity or for a small charge if not. I’ll say it again it’s a fantastic building.

‘I’m very proud of all the people involved, particularly the Town Clerk Phil Rowe who had the initiative in the first place to come to us as a council and say, look, the building’s for sale.’

Curator Felicity Cole, whose involvement with the museum dates back more than 30 years, said: ‘It’s a dream come true. Once everything becomes normalised again I’m excited about the opportunities the building affords us.

‘To be able to have school party downstairs and at the same time perhaps an event in one of the community rooms upstairs is wonderful.

‘One of our local arts teacher came in and said, wow, we’ll be able to do so much here, and we’ve got no end of groups clamouring to do things here.