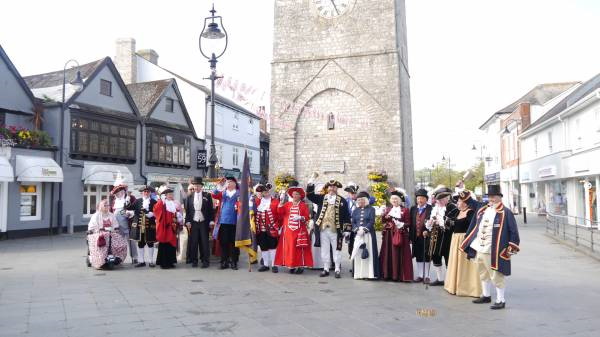 11 Crier’s took part in the competition, which was held in front of St Leonard’s Clock Tower throughout the day.

It was a very colourful (and somewhat noisy!) event. Crying is very much a forerunner to today’s daily newspapers as it is an early form of relaying newsworthy items that dates back centuries.

The competition involved 2 cries – the ‘Home Cry’ took part in the morning where the Criers promoted the town he or she represents and an afternoon cry which this year was ‘Horses’.

First place crier went to Les Ellis from Dartmouth, second place to Chris Smirthwaite from Liskeard and third place to Andrew Fox from Ilminster. Host Town Crier Nigel also awarded Jackie Edwards from Kingsteignton his own personal prize of a knitted Town Crier to who he thought gave the best second cry, congratulations to them all.

All winners received a trophy, a certificate and also a monetary prize which was kindly donated by Lord of the Borough Keith Stokes Smith.

Austins Department Store awarded a prize for best-dressed escort which went to the escort of Chris Smirthwaite (Jenny) from Liskeard and best-dressed couple, this prize went to Mike & Angie Bishop from Frome.  A trophy was also awarded to best-dressed crier and that went to Philip Brown from Oswestry.  Plus winner of the Devon Championship went to Les Ellis of Dartmouth.